The Zort series is a collection of single-level mods for ZDoom created by Mike Watson (Cyb) between 1999 and 2003. 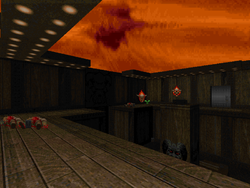 The first map in the series, finished in March 1999, is a small map in E4 styling, built around three courtyards and a few adjoining rooms. It experiments with early ZDoom features, notably polyobjects, colored lighting, stealth monsters, and ambient sounds. The cricket chirping heard throughout the level would become a signature of the series. The music used is "Donna to the Rescue".

Released just a few days after the first, the second map features a building of brown bricks and green marble with impossible architecture (tall structures deliberately hidden by the sky). ACS is used to present a few scripted events, such as waking up dormant monsters. Stealth monsters, polyobjects and colored light do not reappear, but the cricket is still there, accompanied by buzzing flies and dripping water. The map features a custom sky texture from Ola Björling, and a music track tentatively attributed to Dave Shaw.

The third map of the series inaugurates use of the Print function to talk to the player, which would be another staple of the series from then on. Notably, it starts by paraphrasing John Romero's inverted speech as the Icon of Sin, explaining at the start of the level that "to beat the level, you must beat me", meaning the level's cyberdemon, in reference to Mike Watson's screenname. The map uses colored lighting, transferred heights, scripted events, and a pair of stealth arch-viles, but the cricket is mysteriously missing. Some textures were taken from the Gothic DM series, and the custom music used is "Dry Rot" by Mark Klem.

Zort 4 features a techbase, with a rather drab and orthogonal layout, agremented by an outdoor section along train tracks. It experiments with camera effects with several computer panels that can be activated to look at another room, midtexture bridges, and a small storyline told by printed messages, explaining what you need to do. The map can be quite challenging if you forget to check out the small armory next to the starting room. Other effects showcased include an elevator descent, with the expectable monster invasion during the trip down, and an instadeath sector caused by a water puddle around exposed power wires. Dormant barons, a stealth Hell knight, and a cyberdemon fight are on the menu. It uses the soundtrack "Devil's Disco" by Peter Tomaselli (Kniggit).

The fifth installment showcases the return of the cricket, and a return to the brick and marble theme. It features several secrets accessible only by completing some jumping puzzles (climbing up trees and then jumping on pillars and midtexture bridges), and print messages taunting the player. It is one of the few maps in the series that does not feature any fight against a cyberdemon, but there are some stealth monsters. It uses the double song "Time Runner" from Memento Mori II MAP25, by Mark Klem.

The sixth map, the last to be released in 1999, uses quotes from the Doom comic and other messages in the same literary style, and introduces swimmable zones to the series, as well as projectile traps. It features sprite replacements for the demons (redder skin tone than normal), lost souls (using the beta lost soul graphics), and pain elemental (a recolored blue cacodemon, which leaves a corpse behind). It makes use of textures by Nick Baker (NiGHTMARE), however one of them (N_MTSQ08) was not packaged in the mod and will instead appear as ZDoom's "missing texture" checkerboard graphic. The music is again borrowed from Mark Klem.

The seventh map, actually released a few days before the sixth, renews with using a cyberdemon fight but its usage of scripting and special features is light in comparison to previous installments. It does have some swimmable water, dormant monsters, etc. but features no ambient sounds or polyobjects, for example. The one new feature used here is Hexen's phased lighting in a few stairs. The music is "Time Runner" from Mark Klem again.

For the series' return in late 2002, Zort08 introduces some new features, notably cutscenes, a skybox, slopes and translations. The latter is used to provide some variety among monsters: green imps and demons in nukage, charcoal-black cacodemons in lava, and so on, and even flashing rainbow imps tripping around a mushroom. Scripting is used to make the token cyberdemon fight more challenging by teleporting it randomly. One puzzle involves spawning a radiation suit to dive into an otherwise-lethal magma pool to recover a skull key. This is the only Zort map not to feature a custom music track, however it does include ambient sounds, including the cricket.

The series' final map, released in early 2003, is by far the most polished. It also loses the goofy charm of the series, featuring instead a dark temple full of traps, stealth monsters, with a custom soundtrack in Ogg Vorbis format specially made by Julian Aubourg. The only touch of humor reminiscent of older Zort maps is the chainsaw grab scene, which paraphrases again the Doom comic. Said chainsaw has been made more powerful than in the vanilla game, making it a great weapon against tough enemies such as arch-viles and mancubi. It introduces the use of floor portal, and very annoying Hexen-like earthquakes. The game ends after defeating, in a moving arena, two consecutive couples of cyberdemons and spiderdemons.