Zort 6, titled Rip and Tear!, is a single-level PWAD for Doom II using the ZDoom source port that was released in December 1999. It was created by Mike Watson (Cyb) as the sixth entry in his Zort series, and uses the music track " " by Mark Klem. The par time defined in MAPINFO is 5:25. 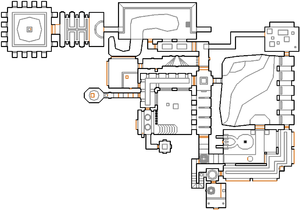 Map of Zort 6
Letters in italics refer to marked spots on the map. Sector numbers in boldface are secrets which count toward the end-of-level tally.

* The vertex count without the effect of node building is 1512.